I did a series of etegami watercolor cards and various versions of a spring haiku, all inspired by of my friend Angela’s photo a white stork, which is currently featured in the DCist Exposed 2013 Exhibit, held at the Longview Gallery, at 1234 9th St NW, Washington, DC, until 4/7/13.

Her image is quite stunning, capturing the elegance of the stork. I love the way she (he?) is looking at you from a sort of slouching angle.

The words, though, that was where I was stuck for a while. One of the basics of etegami is putting “your heart into the selection and writing of the accompanying words,” as Dosankodebbie notes, so I did a little research into the symbolism of storks. Beyond the expected symbolism that storks bring babies to families, I learned that in Bulgarian folklore they are said to symbolized the coming spring (see the “New World Encyclopedia“). Using that as a cue, I worked on series of haiku about our late spring here in DC in 2013 and integrated the slouching look the stork gives the viewer.

Below are some before photos, taken after I’d painted a few storks on various types of paper. I am testing out different papers for their nijimi, or bleed, factor, as I would like to find some more economical ways of painting etegami than having to buy these excellent washi cards from JetPens . The stork on the largest piece of paper, under the others, was done on traditional European-style watercolor paper, do it has no “bleed”; I have my practice lines on that page too, above the stork. 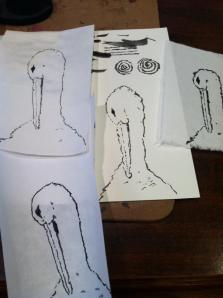 The last few here are some of my finished results. You’ll notice that I reworked the words a few different ways. The very last one is on handmade paper an etegami penpal in Japan sent me last year.

Let me know which one you like the most in the comments. 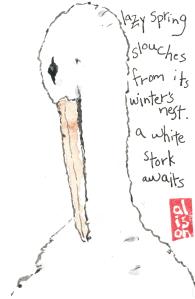 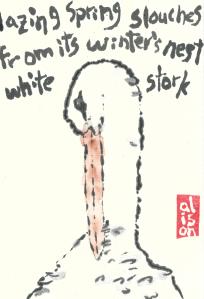