A simple white flower… the thin, papery petaled kind that I find often in the mid-Atlantic area in which I live. I’ve uploaded the photo of a flower that inspired me to do this etegami. I found it growing in the yard 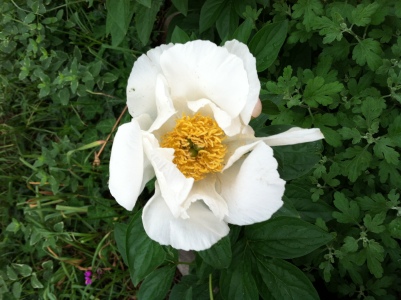 I thought about using words that I saw used in another etagami recently, representing the Zen concept of “Flower Sermon.” In that sermon, per notes found on the Etegami Fun Club Facebook page, Siddhartha Gautama is said to have transmitted wisdom to his disciple Mahākāśyapa without using words, but by simply handing him a white flower. In Japanese, the characters are read “nengemishō” (拈華微笑（ねんげみしょう）) which translates literally to “pick up flower, subtle smile.”

My colleague, however has the most obvious, cheerful, warm smile ever, so it didn’t really fit. I’ll save that idea for later.