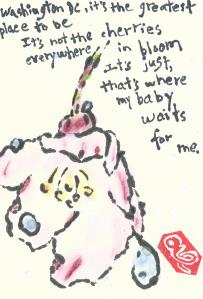 Spring in DC… yes, everyone gets excited about the cherry blossoms, and yes, they are lovely. So lovely that when we went out to the Mall this past Sunday, we found ourselves fighting along with half of America to catch a glimpse of the few blossoms that had opened up, reminding me of the Issa haiku 又人の立ふさがるや初桜 (mata hito wo tachi-fusagaru ya hatsu sakura), or as translated by the Haiku Guy:

I found no blossoms that really compared to the rain covered ones I spotted near my last last week, see below, which I used as a model for a couple quick etegami watercolor cards I did this weekend.  I tried to capture the rain drops in this etegami — but ended up with large blue globules instead. The words on the first etegami are from a Magnetic Fields song:  “Washington DC, it’s the greatest place to be  / It’s not the cherries everywhere in bloom / It’s just, that’s where my baby waits for me.” 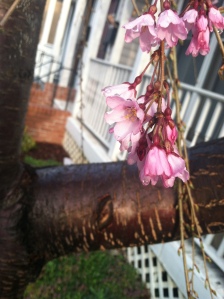 The second etegami uses a haiku from Issa:  Without you / Oh, the vastness of the / Cherry blossom grove (君なくて誠に多太の桜哉 kimi nakute makoto ni tadai no sakura kana).  Again, thanks to the Haiku Guy for the haiku and translation, although I altered the translation a little. 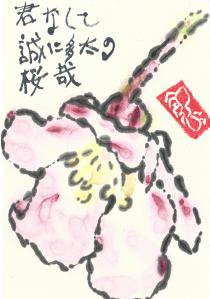