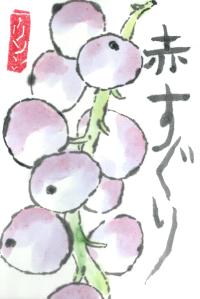 Red currants, from the Sunday morning Bloomingdale Farmer’s Market in our neighborhood

Just what I’ve been searching for–I have had a recipe for red currant/pomegranate syrup meatballs that I’ve wanted to try for ages. Now was my chance. I picked up a box.

First, though, I had to paint them. The berries are very juicy, and I found myself with stained fingers, giving me an idea: what if I used the berry juice as “paint”? I mashed up a few and applied the color to my cards. The color is far less red than the real berries.

The next one, below, has the words “doumo arigatou” or “Thank you” in Japanese. I chose “Thank You” because in the language of flowers, red currant flowers are said to represent thanks.

The final card features the “recipe” for the red currant meatballs. I put quote around recipe because it is more of a set of guidelines, with no measurements. I wish I had bought an extra box of currants to make more sauce — they really cook down a lot! If I were to “measure” things I would suggest: 3 cups of currants; 1.5 T of pomegranate syrup; about 1-2 t of each spice; about 1 T of orange peel (I cheated and used grapefruit peel); ~1 cup of chicken broth/stock. For the meatballs; I used about 3/4 lb of chicken meat, with about 1/2 cup of onions, carmelized, added an egg, and put in some panko. It was delicious!